Supriya was born into a family of Zamindars in a little town in the then State of Bihar in India,. She is a true blue blood, with royal lineage both in her father’s and mother’s side. She had her schooling in her home town, her college at NSM (Dehra Doon) and completed her graduation from Bhagalpur University, Bihar.

A naturally versatile personality, she was a keen sportsman throughout her academic career and beyond. Even in her youth, she became a badminton champion and acted in the main role of a successful stage production. She completed a three year diploma course in vocal music and also a full-fledged Beauticians’ Course in Kolkata. For long ten years, she ran, as the sole proprietress,   a highly renowned and successful Beauty Parlour in a prestigious area in the Kolkata metropolis.

In the year 1998, her husband moved, on transfer, to London and she followed him, with their two sons. During her four years’ stay in London, she led an active life, including a job in Laura Ashley, the famous dress and designer chain.

After her return to India, she got deeply associated in social and philanthropic activities at various centres of India, as an office bearer of a most prestigious organization. During this period, she became an avid practitioner of Patanjal Yoga under Shri Ramdev’s  school and also took training in the Art of Living course of Shri Ravi Shankar.

In the year 2006, she was attracted to Reiki and started learning it…stage by stage. By 2007, she completed her 1st, 2nd and 3rd Degree in the Usui System of Reiki under her esteemed Guru, Mrs. Savitri Patnaik in Hyderabad (India). She went deep into Reiki Healing and met with magical successes…one after another, which encouraged her to go further ahead. She took her Master-Teacher Degree and then became a Reiki Grand Master. Subsequently, she also learnt Crystal Healing and then became a Master in Angel Therapy.

For several years now, Supriya is totally engaged in Reiki training. She has already established herself as a most eminent Reiki Teacher in the city of Kolkata. She has trained hundreds of successful Reiki practitioners, who, in turn, have brought the blessings of Reiki into the lives of thousands. She specializes in intense and hands-down training to small groups of eager learners … aged seven years to eighty-six years. 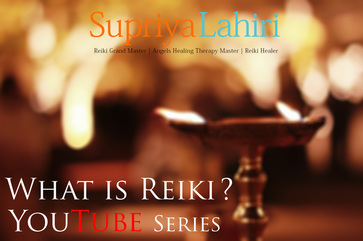 What is Reiki and Angel? A series on YouTube by Reiki Grandmaster Supriya Lahiri. (Originally aired on Sristi Channel, Kolkata, India)
Created by irihaLA